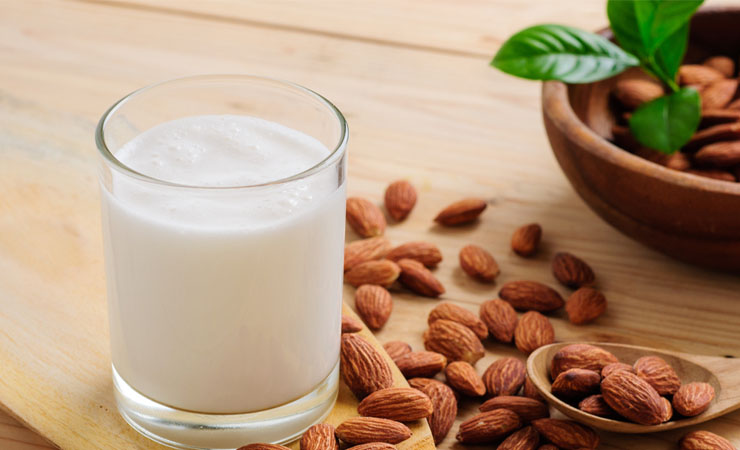 I always heard my grandmother talk about almond milk in ways I’ve never thought of using it.

Almond milk is made by crushing the previously soaked almond seeds, preserving the essence and then mixing it up in a blender to make milk. It is really expensive in the market, make it at home and you’ll be saving a few bucks of buying it from Walmart or some other superstore. Its preservation is really easy. You do not need a refrigerator to preserve it so you can make the best of it.

Almond milk beautifies your skin, is one of the best replacements of dairy milk in diet charts, is good for your bones, has a lot good nutritional value, boosts up the immune system and is useful in enhancing the memory.

In short, Almond milk is a complete part and parcel of a healthy substitute of dairy milk. Being loaded with vitamins, minerals, a little amount of fat and some proteins, you can use it guilt free in normal daily lives.

15. Use It To Prepare Cheat Meals

You can use Almond milk to prepare one of your favorite cheat meals. Make pies, pancakes, shakes, smoothies, cakes, anything you want using Almond milk. You will be making goodies having low calories and low glycemic index. There is no stone left unturned when it comes to calories and benefits of Almond milk.

Make up energy boosting milk shakes using Almond milk. My personal favorite is Banana chocolate milk shake. Here’s how it is made:

It is great refreshment if you drink it post-workout!

14. Pregnant And Lactose Intolerant? Almond Milk To The Rescue

Being pregnant and lactose-intolerance is a bit of a struggle. We all want the best for the child growing inside of us. Being lactose intolerant means your sources of getting a good supply of Calcium, Magnesium and Potassium are close to none, but fear not as thy rescuer Almond milk will come and save the day!

According to the doctors, a good supply of vitamins, minerals and water is good for the baby. All this can be provided to the child of a lactose intolerant mother if she consumes Almond milk.

A cup of Almond Milk provides around 450 milligrams of Calcium per cup that is 45% of Calcium you require daily. This is more Calcium than boxed dairy milk provides us. Also Vitamin B2 in Almond milk helps reduce the reoccurrence of migraines in pregnant women. It also promotes the growth so it is essential in pregnancy.

13. Good For People With Arthritis And Osteoporosis

Almond milk is really good for the bones. Along with Calcium, it has Vitamin D, Potassium, Magnesium and other minerals. Women, if you use Almond milk, your risk of osteoporosis and arthritis are reduced greatly.

Almond milk provides around 400 International Units which is a quarter of Vitamin D you need daily in your diet every day. The higher amount of Vitamin D in your body, the lesser are the risks of developing bone deformities as you reach the later stages of life.

Potassium present in almond milk deposits in the bone, making the bones dense and less prone to fractures. Potassium levels in 8 ounces of Almond milk have approximately 35mg of Potassium. This level is 1% less than the recommended amount of Potassium to be taken daily in the diet.

Magnesium in the Almond milk helps with the muscular functions of the body. It aids in controlling nerve functions and regulating levels of blood glucose. There is around 4% of Magnesium in an 8 ounce cup having Almond milk. This level is comparatively less as the amount required by the body but contributes to a level that should not be neglected in the recommended daily intake.

12. Give Your Heart A Break

Is Almond milk good for the heart? Yes, that’s true. Almond milk being a substitute for cow’s milk has less levels of cholesterol and saturated fatty acids. It is beneficial for people with cardiac problems.

Almond milk has no cholesterol, saturated fatty acids, instead it has ample amount of omega-3 fatty acids. Omega-3 fatty acid lowers the triglyceride levels in blood, shielding us from blockage of blood supply towards the heart. Patients having Ischemic Heart Disease can use this without worries of it being hazardous to health.

Also, low levels of Sodium in Almond milk keeps the blood pressure in control in hypertensive patients. So this is a win win situation.

Almond milk has a good supply of Vitamin E. It contains 50% of the recommended amount of Vitamin E that our body requires. Vitamin E being good for the skin helps a tired, dull face to brighten up, adding a natural radiant glow. It has an antioxidant property that gets rid of harmful free radicals that are released by our body daily. It reduces the chances of stroke, cancer and other harmful effects that the radicals can cause in the body. Almond milk, if applied on the skin, does wonders to the face.

You can use the milk in face masks. This is how one of the easiest peel off mask is made:

Use Almond milk mixed with rose water as a cleansing lotion. Use it after applying makeup so that the makeup comes off easily.

“15 benefits of taking Almond milk for a healthy lifestyle. Healthy substitutes for fattening foods to shed off some extra pounds.”

10. Powers Up The Immune System

Almond milk also boosts the immune system. It keeps the first line of defence that is the immune cells strong, aiding in a clean, healthy body. It is advisable to have Almond milk every night especially in lactose intolerant children whose immunity is severely compromised because of lack of absorption of Lactose. Almond milk will also hydrate them, regulating their kidney functions and controlling the pH of blood, skin and genital organs, ensuring them to be germ free.

Also a study recently showed the reduction in rate of spread of cancer in Prostate cells that were previously being stimulated by cow’s milk. However it is advisable still to consult a doctor for cancer progression and treatment.

Almonds when crushed and blended with water make up Almond milk. This can be used as an alternative for breast milk. It has a sufficient amount of vitamins, minerals, a little amount of good fat, a lot of proteins and iron.

All of these things are really important for the growth of an infant. It is lighter and healthier as compared to dairy milk, rice and soy milk. It aids in growth and development of a lactose intolerant infant. It has Calcium that is required for growth of strong, healthy bones and teeth. It also helps in building up the immunity of the growing child. Not as nutritious as the breast milk, it still is a good alternative in place of breast milk.

I remember the time I was trying to lose a few pounds for my sister’s wedding. I was literally counting every calorie I took. After searching up the internet the only conclusion I reached to was substituting the calorie rich food by zero calorie meals.

When the decision to choose milk came, I chose Almond milk because I liked the sweet taste it offered. Not only that, it also had less amount of calories as compared to full cream cow milk I was taking.

A cup of Almond milk has about 60 calories only while full cream cow’s milk has about 122 calories, meaning I cut down approximately half of the calories I consumed from cow’s milk. Keeping in mind about the Calcium levels, I opted for it as they were the same in cow’s milk.

Here’s a recipe of my favorite ‘Non-Dairy Chocolate Pudding’ which I took from a fitness blog titled, “A Beautiful Mess”:

“Almond milk and its uses nowadays.15 amazing ways to use Almond milk in daily life. Almond milk to keep your body healthy and smart.”

Gluten is a protein found in wheat, barley and rye. Eating gluten free is one of the latest trends followed by people who don’t even know what Gluten is. While having a Gluten-free diet may be a fad for someone, for others there is no choice but to have it for survival.

People with an autoimmune disorder named ‘Coeliac Disease’ are Gluten intolerant. They may suffer from malabsorption, iron deficiency, osteoporosis and dehydration leading to a poor quality of life. For this purpose, it is necessary for such people to use substitutes for a healthy body. Gluten containing flour can be substituted by a gluten free one. If you are a vegan, substitute soy milk with Almond milk. Not only will this provide you with the nutrition but also it will be healthier.

Prepare your favorite dishes using Almond milk. Life a healthy life, smile and eat away gluten-free goodies throughout your life.

Here’s a gluten free recipe of my favorite cupcakes you can try at weekends to develop taste for Gluten free products:

Muscle building requires patience, continuous hard work, a good oxygen supply and a good nutritional supply. Almond milk has about 1 gm of Proteins in a serving of 8 ounce.

Even though it has such a low quantity of proteins, it has other substances that work along with proteins, help in building up muscles and maintaining them. Those are Riboflavin, Vitamin B and a lot of Iron. It is a perfect muscle booster for body builders.

The iron present in the Almond milk helps give an adequate supply of oxygen to the muscles of the body. So proteins plus good oxygen supply gives strong finely toned muscles.

4. Prevention Of Gall Stones? Yes, You Heard Me Right!

Gall bladder functions normally in our body by emulsifying fat globules that we consume in our diet. Impairment to the function and consumption of fat rich meals then leads to formation of gall stones. When the size and number of gall stones increase, unbearable pain is experienced on the left side of the abdomen. The only solution to ease the pain permanently is to surgically excise the gall bladder.

Almond milk is not considered as dairy milk because it is derived from plant sources. We all know that Almond milk is made by crushing the seeds, extracting the essence and then blending it up in the food processor. Thus the fiber content in the seed is not lost.

It has a relatively low glycemic index so pre diabetics and diabetics can use it to prevent the risk of diabetes. The sugar in other dairy products get stored in the body as fat while the sugar in Almond milk is so low in content that is fully digested in our body and used up in providing energy.

I know a lot of you must be wondering how Almond milk tastes like. I used to wonder the same thing a few years back when I didn’t have it.

Almond milk tastes like the milk left at the end when you have had your cereal. It has a hint of sweetness, a silky texture, and a bit water like consistency. Other than that, Almond milk is a perfect blend of flavor and nutrition.

Almond milk, when bought from the grocery store, is available in different flavors. Some are sweetened, some unsweetened, some having vanilla flavor, some chocolate and so on. Depending on the type of flavor we choose, the caloric intake varies.

Some Facts about Almond milk

50 Cute Paragraphs for Her

coveville - Dec 3, 2020 0
One of the critical aspects of people these days is the health condition. Healthy living means a wealthy life. Fish oil is one of the...